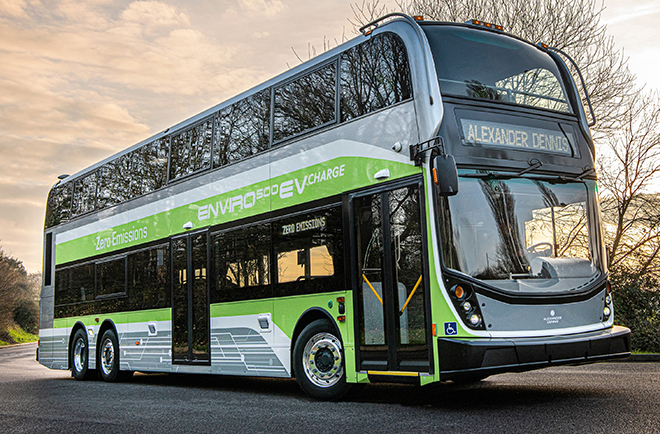 Bus and coach manufacturer the NFI Group has unveiled its first zero-emission, three-axle double-deck bus. The Enviro500EV CHARGE is the North American all-electric version of the company’s popular double-decker bus, and is produced by NFI subsidiary Alexander Dennis (ADL).

“When we acquired ADL in May 2019, we knew that ADL’s strong international growth agenda and double-deck bus platform would mean an exciting road ahead,” said Paul Soubry, President and CEO of NFI. “We are leading the evolution to zero-emission mobility—the ZEvolution, as we like to call it—and ADL is a central part of our continued leadership and innovation.”

“The Enviro family is the world’s best-selling double-deck bus, with over 18,000 sold around the globe,” said Paul Davies, President and Managing Director, ADL. “Today we add a milestone as we unveil our first ever battery-electric, three-axle, high-capacity double deck bus designed specifically for the North American market. We are excited by the positive feedback already received from transit agencies who have trialed this vehicle.”