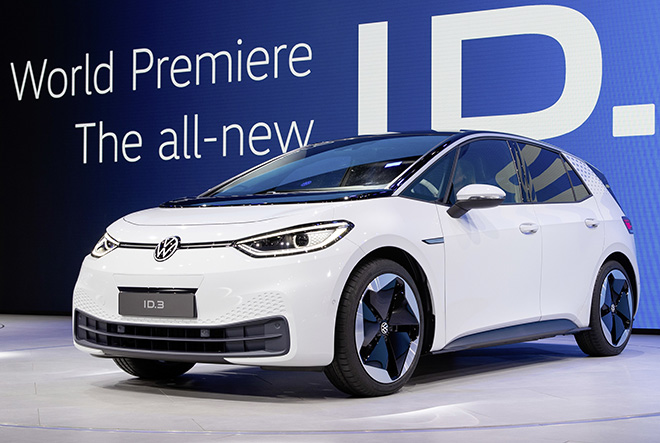 Volkswagen’s first EV designed for mass production, and the first to be based on the modular MEB platform, is on display at this week’s Frankfurt Motor Show. So are a lot of other EVs – mainstream outlets from CNET to the Wall Street Journal reported that electrification is the dominant theme at this year’s show.

The VW ID.3 is a five-door hatchback with three battery options. The base model will have a 45 kWh battery pack that delivers a range of 205 miles (as measured by the WLTP). The mid-range option (the only one offered for the launch edition), has a 58 kWh pack with a range of 261 miles. The top of the range will be a 77 kWh rig that packs 342 miles.

Production is to begin in November, and VW claims to have over 30,000 pre-orders on the books. The entry-level version is expected to be priced under €30,000 in Germany. Now for the bad news: there are no plans to sell the ID.3 in the US.

The Germans haven’t entirely forgotten us, however. Also on display in Frankfurt is a camouflaged production version of the ID.4 CROZZ, a crossover that’s expected to hit the US market next year. VW isn’t ready to give the press a good look at the CROZZ yet, but the booth bunnies say it will have a two-motor all-wheel drive system, an 83 kWh battery pack and a range of “up to 300 miles.” VW plans to offer a 150 kW DC charging capacity.

Last year, VW said it will begin building the ID CROZZ and the ID BUZZ in the US in 2022. The company has announced an investment of $800 million in its Chattanooga, Tennessee, factory to prepare for the production of the two new vehicles.

Meanwhile, Volkswagen execs are hinting that, thanks to economies of scale, they’ve brought the cost of the ID.3’s batteries below $100 per kWh, the figure that many analysts consider to be the tipping point at which EVs become more affordable than legacy vehicles.

Ralf Brandstätter, COO of the Volkswagen brand, wouldn’t be drawn – when the New York Times recently asked him whether the automaker had reached the magic number, he just grinned and said, “We are the company that will provide electromobility for all.” However, another exec, who declined to be identified, said that the company was paying “less than $100/kWh for batteries.” (Of course, the Times did not specify whether this referred to cell-level or pack-level cost.)