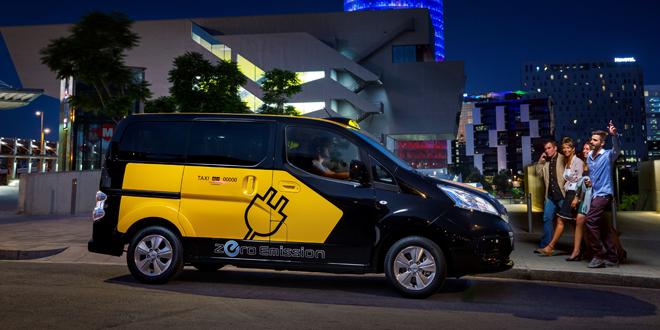 Nissan has announced that its e-NV200 electric commercial vehicle will go on sale in Japan during fiscal year 2014. Production will begin at Nissan’s plant in Barcelona, Spain in mid-2014.

The e-NV200 is based on Nissan’s NV200 commercial van, and uses the same powertrain as the LEAF. It has been in real-world testing with commercial fleets since 2011, and will be on display at the 2013 Tokyo Motor Show.

Two pilot deployments are in the planning stages. Barcelona will be putting a fleet of e-NV200s into service as taxis – preparations are being made to install a quick charger network and dedicated EV parking areas. In Nissan’s hometown, Yokohama, the city may expand the existing Yokohama Mobility Project Zero with the introduction of e-NV200s for its public service vehicles.

The legacy gas-powered NV200 was selected as the next-generation taxi in New York City, apparently against the wishes of outgoing mayor Bloomberg, who has been a great EV advocate, so it may be that the e-NV200 will someday join the Big Apple’s taxi fleet as well.