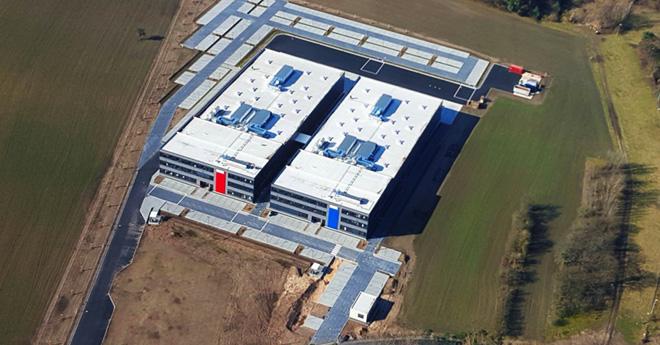 German battery systems provider BMZ has opened up the first two buildings at what it says will be Europe’s biggest lithium-ion battery factory, in Karlstein-Großwelzheim, Germany.

When the facility is completed in 2020, it will cover some 55,000 square meters, including production, laboratory and office buildings. It will employ a staff of up to 1,500 people, and produce 800 million batteries per year, with a total capacity of 30 GWh.

Hold the Gigafactory comparisons, though – these batteries are not necessarily destined for electric cars.

“Lithium-ion batteries are also used in e-bikes, electrical appliances, gardening tools, energy storage systems, transport vehicles, excavators and so on,” said company founder and owner Sven Bauer. “Unlike electric cars we are presently undergoing a real demand boom in many of these sectors. The modular concept of our new factory units enables BMZ to respond faster and more flexibly to this growth scenario.”

“It is most important to build up our own production of lithium-ion cells in Germany. That is the only way to reduce the dependency risks on the few, mainly Asiatic cell producers in the long run,” continued Bauer.

Bauer says BMZ intends to launch a new cell, with a prototype available at the end of this year, that delivers up to 60% more capacity than the current industry standard 18650, along with significant improvements in durability, performance, energy and charging current.