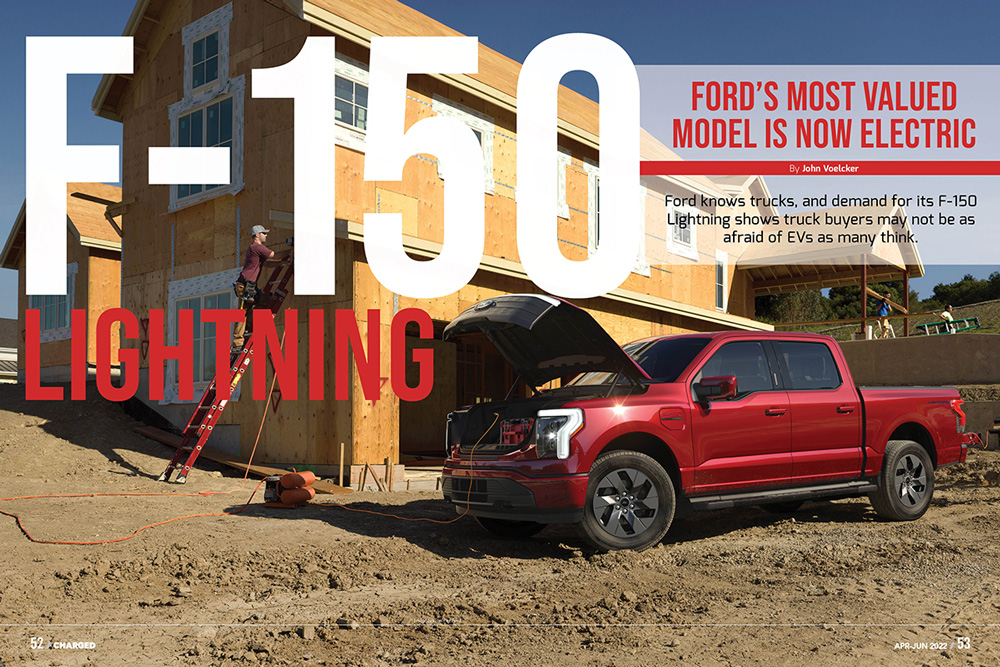 Ford knows trucks, and demand for its F-150 Lightning shows truck buyers may not be as afraid of EVs as many think.

The 2022 Ford F-150 Lightning pickup truck may be the first real mass-market electric vehicle sold in the US. Used by individual owners and businesses alike, pickups are a massive part of the auto market—20 percent in 2021, totaling nearly 3 million units, according to Motor Intelligence. At the top of the heap is the Ford F-Series, the best-selling US. vehicle line for more than 40 years.

We drove several F-150 Lightnings, in various trims, with and without payloads or trailers, out of San Antonio and through the winding roads of Texas hill country during the first week of May. Ford rolled out a full team of managers and executives who’d created its first electric pickup, but the truck itself was the focus for dozens of reporters, analysts and reviewers.

The F-150 Lightning is good. Good enough, perhaps, to convince non-coastal US drivers that electric vehicles are real, and that they’re neither nerdy hatchbacks nor luxury cars from Silicon Valley startups run by erratic egomaniacs. Sure, they’re hardly the most efficient EVs on the market. But the F-150 Lightning is an EV mass-market buyers will likely find reassuring, familiar, and mostly predictable. That can only be a good thing for EVs overall.

Better on the road

Getting into an F-150 Lightning is no different than getting into any other F-150. Step on the sill or climb onto the running board (if there is one), grab the pillar-mounted handle, and swing into the seat.

Once you’re perched in the command position, you’ll see a long hood, large and useful door mirrors, a view through the vertical rear window (unless your bed load rises to block it), and one of two touchscreens in the center of the dash. Lower-line Lightnings use the 12-inch horizontal display from high-end gasoline F-150s. Top trims upgrade to a portrait-style 15.5-inch screen like the one in the Mustang Mach-E—but with additional truck-specific info and options. Adjust the steering wheel (manual or power, depending on trim) and those mirrors, and you’re off.

The first thing current F-150 drivers may notice is the ride: This is the smoothest and best-riding version of the F-150 nameplate, ever. That’s due to two things: the independent rear suspension and a perfect 50-50 weight distribution when unloaded. With the battery pack below the cabin and bed, the Lightning has a much lower center of gravity than any F-150 powered by an engine. That and four-wheel independent suspension make it far easier to toss around curves.

That weight distribution, however, offers pros and cons. On the plus side, you can confidently power a Lightning through a curve faster than its gas counterpart—though we also felt some uncomposed behavior and what chassis engineers call “head toss” on uneven pavement.

On the minus side, adding 1,500 pounds of plywood in the bed or 5,000 to 9,000 pounds of trailer on the hitch makes the front wheels light. With both a full bed and a trailer, we were able to spin the front tires on hard acceleration—on, say, uphill freeway on-ramps. (All-wheel drive is standard on all versions of the Lightning today.) Flooring the pedal even produced some squirming as the rear wheels powered forward while the fronts fought for traction. The nose-heavy weight distribution of an ICE-powered F-150 goes some way to alleviate this.

What no other truck can do

To be fair, Ford has to accommodate a vastly greater set of use cases for an F-150 than it does for, say, the Mach-E. And the Ford’s conventional metal springs and shocks have to handle all the different loads and weight distributions thrown at them. No version of the Lightning offers air suspension, unlike the GMC Hummer EV and the Rivian R1T.

A big part of the Lightning’s appeal has turned out to be a use case that has nothing to do with on-road performance. It’s the ability to use its battery to power your house during an electricity outage—if you get the big battery and high-end spec, and have a house with wiring that accommodates it.

We surmise Ford was startled at the degree to which this idea propelled the truck’s popularity. Certainly the week-long Texas power outage of February 2021 can’t have hurt, in a pickup-crazy state. But it’s not a new idea for EVs—Japan used the relatively tiny 16 kWh battery packs in hundreds of Mitsubishi i-MiEV minicars to power mobile medical units in the wake of the March 2011 earthquake and tsunami that destroyed the Fukushima nuclear plant.

There are asterisks, of course: Powering your house requires the larger-battery version of the Lightning, along with the PowerStation Pro home charging station, which delivers up to 19.2 kilowatts (a $1,310 option for lower trims). Ford has partnered with Sunrun for installation of a $3,895 home integration system that includes a 9.6 kW DC-to-AC converter and an automatic transfer switch for the home’s electrical panel. Still, it’s a use for EVs that gasoline trucks can’t duplicate, one that justifiably seized public attention.

At its presentation before the drives, Ford showed another facet of the F-150 Lightning’s power-out capabilities. With an available adapter, a Lightning was able to recharge the battery of a Mach-E using that car’s portable charging cord. EV-to-EV charging, while hardly fast, offers the roadside-rescue equivalent of that 5-gallon can of gasoline.

Ford knows trucks, which in North America are its core strength—to the point that it sells no passenger cars other than the Mustang sports coupe. Everything else is an SUV or truck of some sort, including its excellent new Maverick compact pickup. But a battery-electric truck was still a big evolution. As Tesla gathered steam from 2012, Ford spent the decade grudgingly producing minimal numbers of the uncompetitive Focus Electric, purely a compliance car that sold less than 10,000 units in eight years.

The origin story of the F-150 Lightning wasn’t something the EV world saw coming in the mid-2010s. The decision to electrify the company’s core product and crown jewel came out of the Team Edison group assembled by CEO Jim Hackett after his predecessor, Mark Fields, was summarily fired in May 2017 after three years. Among the reasons for his departure: zero meaningful progress on EVs.

The group concluded that Ford had to change course, and do so fast, radically and effectively. The result was the Mustang Mach-E, which audaciously used Mustang design cues and performance traits in an all-electric four-door crossover that was originally developed as another compliance car. Then came perhaps the most obvious market segment: urban and suburban delivery vans—the first Ford e-Transits were delivered earlier this year.

But building an all-electric version of its core product, the company’s golden goose, took the EV program into the heart of the company. Team Edison surveyed truck owners, and found many were open to the idea of an electric F-150—though skeptical. The message was clear: It had to do everything the gasoline F-150 did…and it couldn’t be “weird.” It had to be, in other words, an F-150.

So how do you make an F-150 powered by electric motors and a battery, if the chassis and powertrain must change radically? The answer was to keep the look, the familiar user interface, and the current utility of a gasoline F-150—but add capabilities the non-electric F-150 can’t possibly provide.

The frame rails that surround battery packs of 98 or 131 (usable) kWh differ greatly from those of a gasoline F-150, as do the twin electric motors powering the front and rear wheels. The Lightning is the first-ever F-150 with independent rear suspension, and eliminating the engine and transmission allowed Ford’s designers to create a front trunk. While the company insists on calling it a “Mega Power Frunk,” it nonetheless offers 400 liters (14.1 cubic feet) of capacity and 400 pounds of load rating—enough for the luggage of four journalists en route to a drive event.

What didn’t change was the cab structure and pickup-bed interior. The sheet metal is smoother and more aerodynamic, but the Lightning is obviously an F-150. The interior, too, will be familiar to any F-150 driver—as will the bed, which retains all mounting points, tiedowns, tailgate, and other features so owners can transfer specialized “upfit” gear from one F-150 to another.

That last point is especially important, because Ford is heavily focused on the fleet usage aspect of an electric pickup. Considering its two other EVs to date, the Mustang Mach-E is sold almost entirely for personal use, whereas the e-Transit buyer is very likely a commercial or fleet user. The F-150 Lightning bridges both those uses, with the Pro trim for fleet users and the XLT and Platinum trims for retail buyers.

Ford is already finding that its electric pickup is bringing first-timers into EVs, and new customers to the company. Four of five reservation-holders for the F150 Lightning are new to EVs, execs said, and three of four have not previously owned a Ford.

A main challenge for the F-150 Lightning—and EVs in general—will be towing. Ford says its data shows that 75 percent of all F-150 owners use their trucks to tow, and that 85 percent of them tow 10,000 pounds or less. Indeed, the drive event included trailers of 5,000 to 9,000 pounds hooked to Lightning hitches.

Ford’s Intelligent Range algorithm and various trailer-towing features ask the Lightning driver to “qualify” a trailer by towing it for a few miles so the truck can calculate its effect on battery range. Its Intelligent Scales and Smart Hitch functions help owners position loads correctly over the trailer wheels for proper tongue weight.

Towing the lightest of those over 16 miles that included twisty country roads and a short segment of Interstate, we observed energy efficiency of 1.3 to 1.4 miles/kWh. And our truck with a 5,000-pound trailer showed a recorded 1.3 miles/kWh over 1,300 miles. That’s roughly 60 percent of the 2.1 to 2.3 miles/kWh we saw in unloaded Lightnings—and matches results achieved in tests of trailer towing with a Tesla Model X, which cut range by up to half.

The range impact of towing is the same for an electric as a combustion-engine truck, said Dapo Adewusi, the Lightning’s Vehicle Engineering Manager. But even the top-trim Lightning, which is EPA-rated at 320 miles, is likely to return more like 250 miles at steady highway speeds. That could fall to 130 to 150 miles if towing, compared to some F-Series versions that may go twice the distance even while towing thanks to their massive diesel tanks.

There’s also the challenge of on-road charging while towing. Drivers may need to recharge every 90 minutes to two hours, but virtually no DC fast-charging sites today offer pull-through layouts for trailer towing. That is starting to change—Electrify America’s latest designs include pull-throughs. Still, we don’t expect towing to be a major part of the Lightning’s duty cycle for some time, pending larger batteries and better on-road charging infrastructure.

Our final impression of the F-150 Lightning is far from statistically valid, but we think it’s indicative. Heading back on one of the many four- to six-lane highways that lead into San Antonio, a lifted F-250—with wheels protruding easily a foot beyond the wheel wells—roared up behind us and drew level.

The young guy behind the wheel slowed to pace our truck, and gave us a big smile and an enthusiastic thumbs-up when we looked over. We almost changed lanes in shock. If Truck Bros like the Lightning (at least this one), it’s not hard to imagine a bright future for the electric F-150.

Ford provided airfare, lodging, and meals to enable Charged to bring you this first-person drive report.