Wire bonding technology – widely utilized in the microelectronics and power electronics industries since the 1970s – is finding its way into interesting new applications in the growing EV industry – in particular, battery connections.

We’re quite certain that a few EVs are using wire-bonding technology for production battery pack connections, but Charged was unable to find any automaker or wire-bonding supplier to confirm our suspicion. However, a simple Google search will provide photos of disassembled batteries where the technology clearly can be seen. Also available online are the public patent applications from the notoriously tight-lipped Tesla Motors. In 2006, the company filed a US patent application that described a method for using wire bonding techniques to connect multiple cells into a larger battery pack. The EV trailblazer was one of the first to apply conventional wire bonding technology to battery connections.

Groups of individual cells are more commonly connected together with a soldering or welding process. Tesla’s patent application claimed to find problems with these approaches, saying that “the welding process is time-consuming and prone to failure. It is also difficult to test the connection between each battery and the conductors.”

Beyond the simple connections, Tesla describes a design method that also uses aluminum wire connections as fusible links that allow the expected current to pass, while breaking the connection in an overcurrent condition like a short circuit. Tesla’s engineers believe that another problem with other bonding methods is a lack of electrical protection – without a fuse, a single cell can internally short due to a malfunction or damage, and render unusable all of the other cells to which it is connected in parallel.

To learn more about wire bonding technology, Charged reached out to experts at Hesse Mechatronics, a leading manufacturer of fully automatic ultrasonic and thermosonic wire bonders. The process starts with a wire placed under the tip of a slim, rod-like bonding tool. A well-defined force is applied, pressing the wire onto the electrode surface and causing an initial cold-straining at the contact area. The power element comes from an ultrasonic transducer that generates mechanical vibrations in a frequency range of about 60 kHz. Those vibrations are transferred by the bonding tool into the welding area for a period of time on the order of 100 milliseconds. The deformation of the wire and the bonding between wire and substrate steadily progress during this cold-friction process until a pure intermetallic compound between the wire and surface is formed. This process occurs at room temperature. 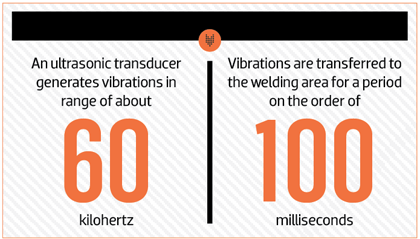 After the first bond is made, the bonding tool travels in a defined pattern to form a wire loop of a desired height and length, and then the second bond is made. The wire is then terminated with a special integrated cutter.

While soldering and welding have been used for many years, Hesse believes they have several drawbacks, such as induced thermal stresses, required post-process cleaning, minimal flexibility and poor quality control and monitoring. “Wire and ribbon bonding perform much better in these aspects,” said McKeown, “and offer a quality monitoring system that evaluates each and every bond, without any negative impact to production throughput.”

The company explained that when working with aluminum wire or ribbon, the process is done at room temperature. No external heat is necessary and the welding zone is not heated up by the ultrasonic friction welding process. Most other welding and soldering processes do require or generate heat to cause the metal to melt.

Ultrasonic wire bonding is also a “clean” process, meaning there is no post-cleaning residue to remove afterwards. With soldering there are flux residues, and, in some cases, welding has bursts of molten metal that need to be removed to avoid any reliability problems. However, the only cleanliness requirement for wire bonding is that the surface be free of contaminants and tenacious oxides.

When it comes to designing and integrating system connections, Hesse explains that, due to the combination of pattern recognition and adapted loop trajectories, wire bonding gives unique advantages over high-tolerance processes like soft soldering, gluing or injection molding of single parts, which then need to be combined. The company lists several other aspects that make wire bonding a flexible design approach, including low loop height, multi-stitch capability, large working area, ribbon or round wire options and deep access. Looped wires are also flexible in many directions, and can therefore handle mismatches among different thermal expansion coefficients better than other joining technologies.

Some metals, like tin and stainless steel, cannot be bonded to directly. However, it is possible to wire-bond to metallizations on top of those, such as nickel-plated stainless steel.

Mono-metallic bonds are the strongest: aluminum-to-aluminum or copper-to-copper, for example. With dissimilar metals there is a range of bonding strengths. Aluminum-to-nickel (commonly used for wire-bonding battery connections) is considered the fourth-best bonding system between wire and surface. Aluminum wire also bonds well to copper, and one of the newest wire and ribbon materials Hesse is working with is a combination of aluminum and copper.

Hesse told us that for heavy wire bonding, aluminum wire with diameters up to 500 microns is the most commonly used material. The company explained that aluminum is an ideal material because it is relatively inexpensive, readily available, a good electrical conductor and easily malleable to make wire bonds. Also, due to aluminum’s flexibility, the space needed to do the wire bonding is not as restrictive as it is with welding, which leads to an increase in power density in comparison to laser or ultrasonic welding.

In addition to aluminum wire, Hesse says that aluminum ribbon and copper wire are also becoming more common. Copper is used mostly in high-power electronics applications, in which it allows higher current densities and higher operating temperatures than aluminum. Hesse explained that aluminum and copper wire bonding will likely coexist for a long time to come, because each technology has its own unique advantages.

Creating dependable connections with the speed and precision demanded in the microelectronics industry requires some advanced production machines. Hesse has been building and refining wire bonding systems since 1995 and boasts that all of the major semiconductor manufacturers are among its worldwide customer base.

Hesse machines allow for a combination of wire types within the same module. This is particularly useful for power module applications in which there are heavy aluminum wires for the silicon die-to-substrate and heavy copper wires for the leadframe-to-substrate. Multi-stitch bonds, or “daisy chains,” are also easily bonded and can have the same or different loop heights and shapes.

With an eye on the expanding market for wire-bonded battery connections (as well as solar applications), Hesse developed the wire bonder model BJ980. The system’s large working table (700 mm [X] by 1132 mm [Y] by 48 mm [Z]) and a bond head rotation of up to 440° gives it the ability to complete connections for large battery modules. Bond heads can be easily changed within minutes to do either round wire or large ribbon.

Hesse explained that setting up a production machine, and its consumables, is always one of the main issues in ensuring optimum equipment performance. Sometimes these setups are done while looking through a microscope, which can be difficult, and yield different results depending on the user. So, Hesse developed E-Box to help eliminate the subjectivity of the bond head setup. E-Box enables the user to view the intricate setup on a large video monitor. Colored templates are situated where the bond head components should be located. This makes it easy to recognize if components are not correctly situated, including the bond tool, wire guide and cutter blade, each of which has its own height and spacing requirements.

Hesse also has a patented quality monitoring system called Process integrated Quality Control (PiQC) that continuously checks the formation and integrity of the bonds being made. A specially designed sensor is mounted onto the ultrasonic transducer and provides real-time vibration feedback to help calculate a bond quality value. Physical signals are also monitored during the wire bonding process, including wire deformation and ultrasonic voltage/current, which are evaluated in real-time. Using these measurements, five individual quality indices are derived: Wedge, Friction, Ultrasonics, Frequency and Wire Deformation.

Wedge and Friction are derived from the ultrasonic sensor in a special signal processing unit. Wedge refers to the mechanical oscillation amplitude of the bond tool tip. Friction corresponds to the friction effects within the interface between the wedge, wire and bond surface. Ultrasonics monitors the ultrasonic power. Frequency reflects the process feedback to the ultrasonic resonant vibrations, such as variations in the stiffness of the bond placement and the substrate clamping. Wire Deformation evaluates the vertical wire deformation during bonding.

The future of battery bonding?

Hesse believes that automotive battery packs are one of the largest potential growth markets for wire bonding. And, in some cases, the company’s machines are used for ultrasonic battery bonding without the use of wire. The process known as tack bonding removes the wire and enables the bond tool to transfer the ultrasonic energy to interconnect two metal surfaces or foils. If a company uses a battery with two external tabs, Hesse can bond them together by ultrasonically exciting the top metal to form a bond with the bottom layer.

Heavy wire bonding is already widely used in automotive power semiconductors, and has been shown to withstand harsh automotive environments that are on-engine or under-the-hood, where the interconnections are exposed to strong vibration and temperature drifts from -40° to 125° C. So, as the automakers continually push to drive out costs and increase the reliability of EV systems, it’s likely that we’ll see more and more wire bonds inside battery packs in the future.