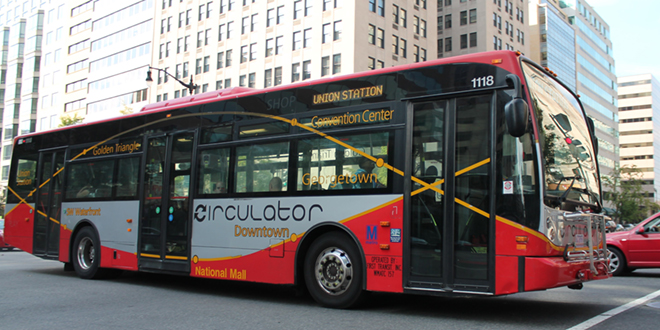 The Washington DC Circulator bus service will soon be replacing its fleet of 49 diesel buses, which dates from 2003, and local transit authorities are organizing one-day showcases so that decision-makers and riders can check out new bus models that will be vying for the contract.

According to the company, its bus is the only battery-electric bus on the market that can operate continuously for 24 hours, thanks to a proprietary fast charging system that uses an overhead charger to add an hour’s worth of energy in five minutes. Nearly 50 Proterra buses are already in service in other cities across the country. Proterra founder Dale Hill said passengers’ response has been great. “Once they ride this bus, they love it.”

Proterra’s bus sells for about $1 million, twice the price of a comparable diesel bus, but once the savings on fuel and maintenance are factored in, total cost works out about the same. “For green technology, you can hug all of the trees you want, but if it’s too expensive, people won’t buy it,” Hill said.