Automakers are a notoriously conservative bunch. They go to great lengths to test and validate new designs before putting them into production vehicles. And, thanks to their cautious ways, today’s vehicles are more reliable than ever.

Recently, however, the addition of advanced Li-ion battery packs to vehicles has presented a major challenge to the auto industry. How can they be certain new battery technology will last the life of a typical vehicle?

The general rule of thumb for automotive-grade batteries is that an EV battery pack should retain about 80% of its capacity after 8 to 10 years on the road. The problem is that basic battery technology continues to advance quickly and cycle life testing is very time-consuming. Also, for many next-generation battery chemistries – like lithium-sulfur technology or silicon-heavy anodes – the major issue holding them back from commercialization is that they lose energy storage capacity too quickly (i.e. their cycle life is not suited for EVs). As scientists attempt to find solutions to the capacity fading problems, quick and accurate cycle life testing has become critically important to the future of the industry.

To perform battery testing, cells are placed in sophisticated test equipment and cycled (charged and discharged) while their degradation is continuously monitored. For use in EVs, automakers are looking for cells that will continue to perform well up to as many as 10,000 cycles. The problem is that running through thousands of cycles would take years. “The battery pack in an EV is usually warrantied to last for 8 to 10 years, but there is no way to actually test it for that long,” explained Antony Parulian, VP of Sales and Marketing for Arbin Instruments, a manufacturer of battery test equipment. “There just isn’t nearly enough time from inception to production. At the most, from the time they choose a cell to use until it hits full production in a vehicle, they could have maybe 3 years of testing data.”

So the key to accelerating battery testing in a reliable way is using very accurate testing equipment. By measuring very small changes in the cell’s performance at the beginning of the cycling process, battery developers are able to extrapolate a trend line and have an idea of how the cell will behave in the longer term. It’s like an early detection system to evaluate a new electrode, electrolyte, separator material, or whatever part of the cell you’re trying to improve. The more accurate the testing equipment, the further into the future you can see. In 2012, Arbin Instruments, Ford Motor Company and Sandia National Lab set out on a multi-year ARPA-E project to develop a system that pushed the accuracy and reliability of accelerated testing to higher power levels. “At the time we started the project, Jeff Dahn of Dalhousie University [who recently began an exclusive 5-year research partnership with Tesla] had already come out with some great methodology for high-precision testing equipment,” Parulian told Charged. “The difference in what we wanted to accomplish was to develop a tool to see the effects of full power – 200 A – running on the batteries. At the time, all other high-precision equipment was designed to test small samples of battery materials – typically at an earlier stage of R&D. We set out to create a system that could test the performance of a production-size cell with ultra-high accuracy.”

Three years later, the result is a new testing equipment product line that Arbin calls the Precision Series – capable of 50 PPM precision under high-power conditions of up to 200 A. “No other battery testing equipment currently on the market is capable of providing that high degree of precision at such high currents,” said Parulian. The system is built to obtain a precise measurement of an indicator called coulombic efficiency, among other characterization metrics.

The primary mechanisms behind the degradation of a battery are the parasitic reactions that occur during normal use, in which a small fraction of the energy that is put into a battery is consumed in every charge-discharge cycle. For example, suppose 1,000 units of energy are put into a battery, and 999.99 units are pulled out during discharge. The small difference is used up in side reactions at the electrodes, and the coulombic efficiency is the ratio of charge output to charge input.

Without a high-precision testing device it is impossible to differentiate between a battery that provides 999.999 units and one that provides 999.991, for example, but the latter would degrade faster since it is losing a larger amount of charge to parasitic reactions. With higher precision, you can develop a trend in the coulombic efficiency with fewer cycles, and then compare different cells in a shorter duration of time. And, perhaps most importantly, the confidence bounds of the forecasting data obtained from high-precision systems are much tighter, which makes the data more reliable. 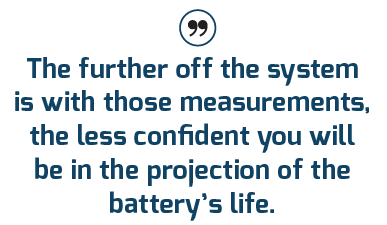 “The idea is that if you can test the cell while controlling a whole bunch of parameters tightly with very little error, then you will be able to predict the failure with high confidence,” explained Parulian. “To do that, you need to eliminate any uncertainty, or error, coming from all the things not related to the cell itself. You want to have really high-fidelity data for the voltage, timing, current, etc. And if you don’t control all the possible errors really well, they will aggregate. When the system calls for 10 A, for example, how close to 10 is actually delivered to the cell? Is it 10 A, or is it 9.9991 A? This is really important, because to calculate the energy delivered (and then the coulombic efficiency), you actually do an integral of the voltage, current, and time. The further off the system is with those measurements, the less confident you will be in the projection of the battery’s life.”

To eliminate measurement error, Arbin spent a lot of time on things like the design of its printed circuit boards, and minimized ripples in the control of the power supply to remove the distortion. “If you’re only testing at 100 mA, the scale of the complexity and difficulty is quite different,” said Parulian. One of the main differences in high-power testing of full-scale production cells is the heat generated by the cell itself during cycling. And therein lies the breakthrough potential for this new equipment. “You and I know that you generate heat when you charge and discharge a full-size cell,” said Parulian. “So the big question is, how does that affect the cell over time? High-precision testing of a small battery sample – like a coin cell – at lower currents will not reveal the long-term effects of heat. So our new Precision Series will open a lot of doors to learn new things at high power.”

By the end of the ARPA-E project, Arbin delivered systems capable of 200 A testing to Ford Motor Company and Sandia National Lab, which was the target current rating from the project. They also recognized that there are a lot of testing applications that will not require power quite that high, so they developed 50 A, 5 A and 1 A systems as well.

Trickling down the product line

Arbin is also in the process of taking what it has learned from the project and applying it to its legacy products.

“During certain steps of the battery development process, our legacy testing equipment is still very valuable for the application,” explained Parulian. “And higher precision typically means more cost, so you will want to use it where needed and where it adds value. So we took a lot of what we learned working on high precision and added it to our laboratory (LBT) series product where it makes sense. We upgraded from 14- and 16- to 24-bit, we cleaned up the board design, and we re-evaluated a lot of the key components to modernize the design.”

“But in a lot of R&D scenarios, or when you’re trying to qualify new batteries that will go into a production vehicle,” Parulian continued, “then you really want high precision and high power. For example, if you’re choosing between cells from five different vendors for your new EV, then precise equipment will be incredibly valuable.”