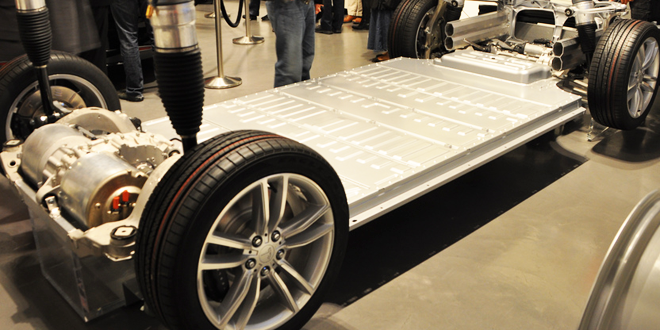 Shortly after the fires, Tesla made a software update that raised the ride height of the Model S to reduce the likelihood of impacts. Now it has added a titanium underbody shield which, to judge by Tesla’s testing videos, looks pretty darn stout, and should have a negligible effect on vehicle range.

According to NHTSA documents obtained by Automotive News, “Impacts with road debris are normal and foreseeable. In this case, Tesla’s revision of vehicle ride height and addition of increased underbody protection should reduce both the frequency of underbody strikes and the resultant fire risk. A defect trend has not been identified. Accordingly, the investigation is closed.”

Elon Musk himself described the new safety feature in an article, which reads in part:

We felt it was important to bring this risk [of fire] down to virtually zero to give Model S owners complete peace of mind. Starting with vehicle bodies manufactured as of March 6, all cars have been outfitted with a triple underbody shield. Tesla service will also retrofit the shields, free of charge, to existing cars upon request or as part of a normally scheduled service.

During the course of 152 vehicle level tests, the shields prevented any damage that could cause a fire or penetrate the existing quarter inch of ballistic grade aluminum armor plate that already protects the battery pack. We have tried every worst case debris impact we can think of, including hardened steel structures set in the ideal position for a piking event, essentially equivalent to driving a car at highway speed into a steel spear braced on the tarmac.

The first of the three shields is a rounded, hollow aluminum bar that is designed to either deflect objects entirely or, in the case of a self-stabilizing, ultra high strength object, like a three ball steel tow hitch, absorb the impact and force it to pike upwards well forward of the battery pack. This pierces the plastic aeroshield and front trunk liner, but causes no damage affecting safety and the car remains in control and driveable before, during and after the impact.

This is followed by a titanium plate, which has exceptional strength-to-weight properties and is more commonly seen in aerospace or military applications. The titanium plate prevents sensitive front underbody components from being damaged and aids in neutralizing the road debris.

By this point, the vast majority of objects will have been deflected or crushed. For the rare piece of debris that remains intact, we added a third shield, which is a shallow angle, solid aluminum extrusion that further absorbs impact energy, provides another layer of deflection and finally causes the Model S to ramp up and over the object if it is essentially incompressible and immovable.

Thanks to high speed cameras fixed underneath the cars during testing, we have a close-up view of what happens to the objects on impact. As illustrated in the slow motion videos below, the shields destroy everything from a solid concrete block to a steel alternator and safely capture and eject objects made of ultra-hard steel.

The protective qualities of the underbody shields are substantial, but their effect on the overall structure of the vehicle is minimal. In total, the shields only have a 0.1 percent impact on range and don’t affect ride or handling. Wind tunnel testing shows no discernible change in drag or lift on the car.