The Hyundai Ioniq, which made its debut at this week’s Geneva Motor Show, is a historic vehicle – the first from a major automaker to be offered in three versions, all of them electrified: the Ioniq Hybrid, Ioniq Plug-In and Ioniq Electric.

The first to hit showrooms will be the Ioniq Hybrid, featuring a 1.6-liter gas engine and a 32 kW electric motor. Hyundai hopes for an EPA rating of 50 mpg, good enough to challenge a certain Japanese hybrid. Indeed, the Koreans do seem to be taking aim at Prince Prius, saying that the Ioniq’s driving experience will be “more dynamic” than other hybrids.

The Ioniq Electric will have an 88 kW (120 hp) electric motor, a 28-kWh lithium-ion battery pack, and a range that Green Car Reports estimates at between 110 and 140 miles on the US test cycle.

Last to arrive in North America will be the Ioniq Plug-In, with an 8.9 kWh battery and an electric range of 22 to 26 miles.

The first Ioniqs are expected to arrive in the US in early 2017. Hyundai has set an ambitious global sales goal of 77,000 Ioniq Hybrids in the first year. 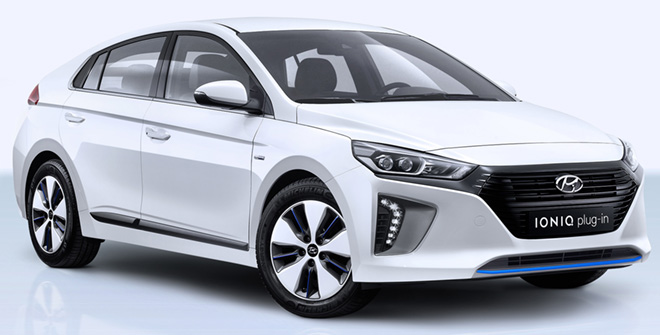