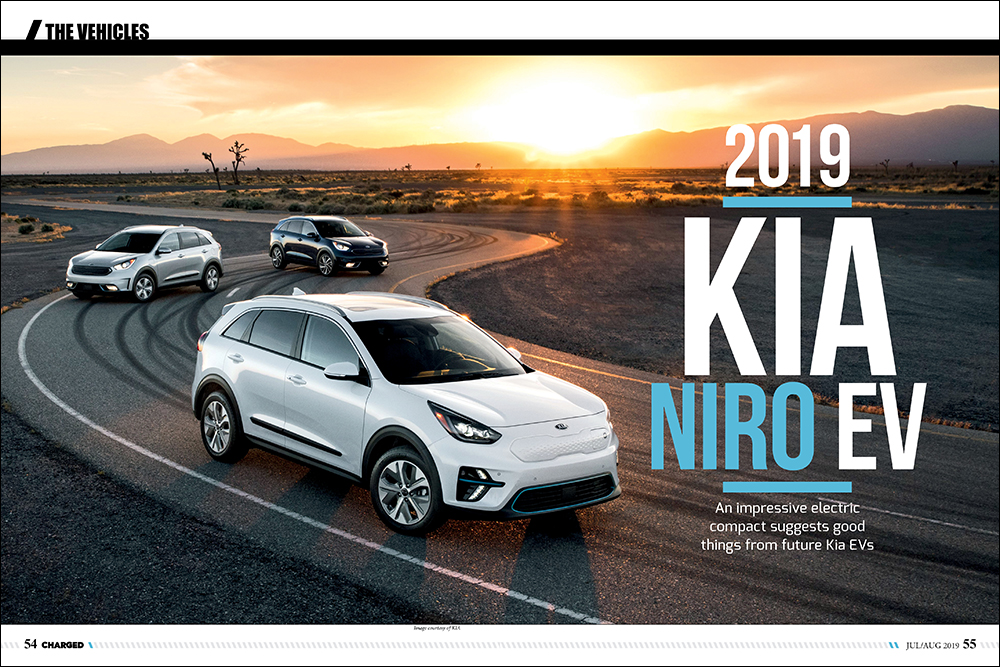 Kia may be the auto brand with the biggest disconnect between perception and reality in the US today. It makes stylish, modern vehicles – passenger cars plus a growing range of crossover utilities – packed with advanced features. It’s a legitimate competitor to Toyota, Honda, and others.

But ask the average buyer if he or she has considered a Kia, and you may still get a puzzled look. “Don’t they make cheap little economy cars?” is the implied question.

Kia’s doing its best to overcome this hurdle, and part of its strategy is to zig where its corporate sibling Hyundai zags. One example is the Kia Niro, a compact hybrid that shares underpinnings with the Hyundai Ioniq. Whereas the Hyundai is a low hatchback with a high tail – think of it as a better-looking Prius – Kia chose to make its Niro a long-roofed wagon, just tall enough to look like a crossover.

The tactic worked. Hybrid and plug-in hybrid Kia Niro models outsold their Hyundai Ioniq counterparts in the US last year, 28,232 to 15,076. That Hyundai total also included the Ioniq Electric, which launched with a 124-mile range. Although Hyundai’s EV had the highest efficiency rating of any electric car on arrival, the Chevy Bolt, which went on sale later the same year, offered double the range (238 miles).

Kia took extra time to bring its all-electric Niro to market, allowing the company to fit a 64 kWh battery. The 2019 Kia Niro EV is EPA-rated at 239 miles of range, right on top of the Bolt EV, and competitive with the Nissan LEAF Plus (215 or 226 miles), and Hyundai’s newer Kona Electric (258 miles).

We spent five days and 385 miles with a Niro EV last spring, and tested it in conditions ranging from stop-and-go Manhattan traffic to the mountains of upstate New York. We came away mightily impressed.

As with all our electric test cars, we used the Niro EV the same way we’d use any other vehicle. We drove it wherever needed, at prevailing speeds, and charged at home when possible and, when necessary, at public sites. Temperatures during our test ranged from 40 to 60 degrees F.

The Kia Niro EV is not only a viable competitor to the Bolt, Kona Electric, and LEAF Plus, it’s better than each of them in different ways. It’s less upright and econocar-looking than the Bolt, with an interior that’s not so Space Agey. The same comment on looks applies to the LEAF Plus.

Unlike the smaller Kona Electric, the Niro has a rear seat that’s usable by adults. Four people roughly 6 feet tall could travel in the Kia, though rear-seat riders may find the floor high (no footwells, since there’s a battery underneath) and the seat back more reclined than usual. Still, they’d have adequate legroom.

The basic shape of the Kia Niro is smoother, sleeker, and more adult than that of its counterpart the Kona Electric. The grille of the gasoline versions has been replaced by a blanking panel, but otherwise only a handful of blue accents and minor details distinguish it from a conventional Niro. In our eyes, that’s a good thing.

Another difference from the electric Hyundai is that Kia has sourced its battery cells from SK Innovation, a smaller Korean maker than LG Chem. The company has also chosen to fit a battery heater to the Niro EV’s pack, a huge boon to buyers in areas with actual winter weather. This was underscored by the auto reviewer for The Detroit News, who noted that his Tesla Model 3 lost far more range in the winter than did a test Niro EV.

The Niro EV offers Normal, Eco, and Sport modes, though the range differences among them seem more incremental than we’d expected. We should note that it has conventional idle creep unless you pull the left steering-wheel paddle three times.

We appreciated the ability to set the Niro EV for maximum regeneration and leave it there. It doesn’t have a single button to do that – like the “e-Pedal” of the new LEAF – but pulling back three times on the left steering-wheel paddle sets the regen to max, and lasts until the car is powered down. That contrasts, incidentally, with the Kona Electric, which has a more complicated system that requires the paddle to be used every time.

Finally, we’re big fans of Kia’s legible, intuitive, easy-to-understand infotainment interface and its dashboard design in general. It has the buttons you’d expect, including knobs for audio and climate controls, and in general it’s easy to get in and figure out. Both the LEAF and the Bolt take a bit more time to get used to, while the Niro EV works like any other Kia: predictably and well.

The Kia Niro EV is no Tesla. But it’s not meant to be. It’s a smart, attractive, practical, long-range compact electric hatchback. And it has just enough crossover design cues that your neighbors won’t think it’s a nerdy eco-car.

We found a few minor quirks with the electric Niro. All are peculiarities that can easily be learned by owners, but are different from other vehicles.

One issue was the need to make sure the car was switched off completely, or “asleep,” before hitting the unlock button on the key fob to release the charging cable. Want to power up the car and get in, then remove your cable? No such luck, as far as we could tell.

The key fob has a graphic showing a button to raise the tailgate remotely, but it didn’t do so – it only unlocked it. That’s fine, since we’ll happily take an extra mile or two of range for the added weight of the self-opening liftback hardware. But the fob icon was perplexing.

The charging cable is stored under the cargo bay floor. If you need to plug in overnight on the road, you’ll have to unload your luggage to get to it (or remember to take it out beforehand). Chevrolet solved that problem with its second-generation (2016-2019) Volt, which has a separate compartment in the side of the load area just for the charging cable.

As noted above, we’d still like a way to set one-pedal driving as a permanent default. We adapted to the need for three pulls on the left paddle every time we powered up, but we did occasionally forget – meaning the car behaved differently than expected coming up to that first stoplight. A solution may be buried deep in the menus, but we didn’t find it, and our test car had no owner’s manual.

Still, these are pretty minor complaints. We found no major drawbacks to the Niro EV, and a lot to like.

How will it sell?

While the Niro lineup outsold the Ioniq in 2018, its sales of 28,000 are still low for a dedicated model. We suspect the Niro EV won’t make an enormous impact on those numbers, simply because it will be limited in availability.

As we suggested earlier in regards to the Kona Electric, the big question is one that applies to many plug-in models: To what extent Kia will make it possible to order the car outside California and a small number of other states?

We don’t know if Kia makes money on each Niro EV it sells, but we doubt it. It uses a large battery in a small car priced below $40,000, and that’s not a profitable combination in 2019. But the Niro EV suggests good things for future Kia electric cars.

Meanwhile, if you’re in a state where they’re sold – California, Connecticut, Georgia, Hawaii, Maryland, Massachusetts, Rhode Island, New Jersey, New York, Oregon, Texas, and Washington – we have to suggest taking a test drive in a Niro EV if you’re in the market for a non-Tesla electric car.

We liked it a lot. In fact, if we had to buy a compact EV today, this might well be our choice.

The motor driving the front wheels of the Niro EV produces 150 kW (201 hp) at peak power. Despite the vaguely crossover-utility looks, all-wheel drive is not available. The electric Niro can fast-charge at “up to 100 kW,” though few CCS stations capable of delivering that rate exist in the US today.

Over our 385 miles, about two-thirds of it highway travel and one-third city and suburban lower-speed use, we logged 3.6 miles per kWh. That’s slightly better than the LEAF Plus we tested a few weeks later over roughly the same routes.

The EX trim level includes a full suite of active safety systems, including adaptive cruise control, active lane control, blind-spot monitoring, and automatic emergency braking. There’s also driver monitoring, which flags you if your attention wanders or your inputs are late and sudden.

Our test car had the Premium Launch Edition package, a further $1,000 upgrade, which included a heated steering wheel, front and rear parking sensors, and a cargo cover, among other features.